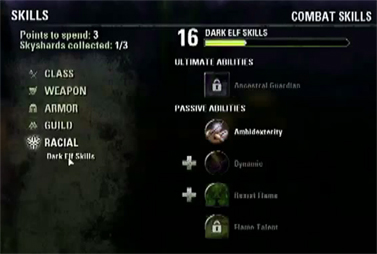 There are 9 playable races in ESO and you can choose any race you like, but you should know that this choice is also important because different races have different racial skills. Racial abilities are a set of unique skills available to each race. In general, all abilities are inspired by TES lore and you will find a lot of familiar skills if you have played single player TES games.

Each race has 4 passive abilities. The first is always unlocked by default. These passive abilities give you different passive advantages, but are not unlocked from the beginning; you need to unlock them during the game.

Each race has a passive ability that increases skill experience gain while using a certain weapon type. You should understand that it is not something that should influence your weapon choice a lot. Such passive abilities increase the speed of leveling up definite weapon trees. For example, Nords can level Two-Handed weapon faster than other types, but the level cap stays the same. The passives don't give any bonus levels.

I do not think that you should pay a lot of attention to racial skills while choosing your class. Elder Scrolls Online is a game that allows any race to choose any class. Any combination is absolutely playable because most of the passives will help any class. Although there are some races which seem suited for certain classes, the freedom of the gameplay shouldn't restrict your choice.