After the game is launched you need to create your character in order to start playing. This process is simple but it can take time. Elder Scrolls Online offers a lot of customization options and you can change the appearance of your protagonist as you wish. Many players tell that they have never seen such a great customization system in MMO game. 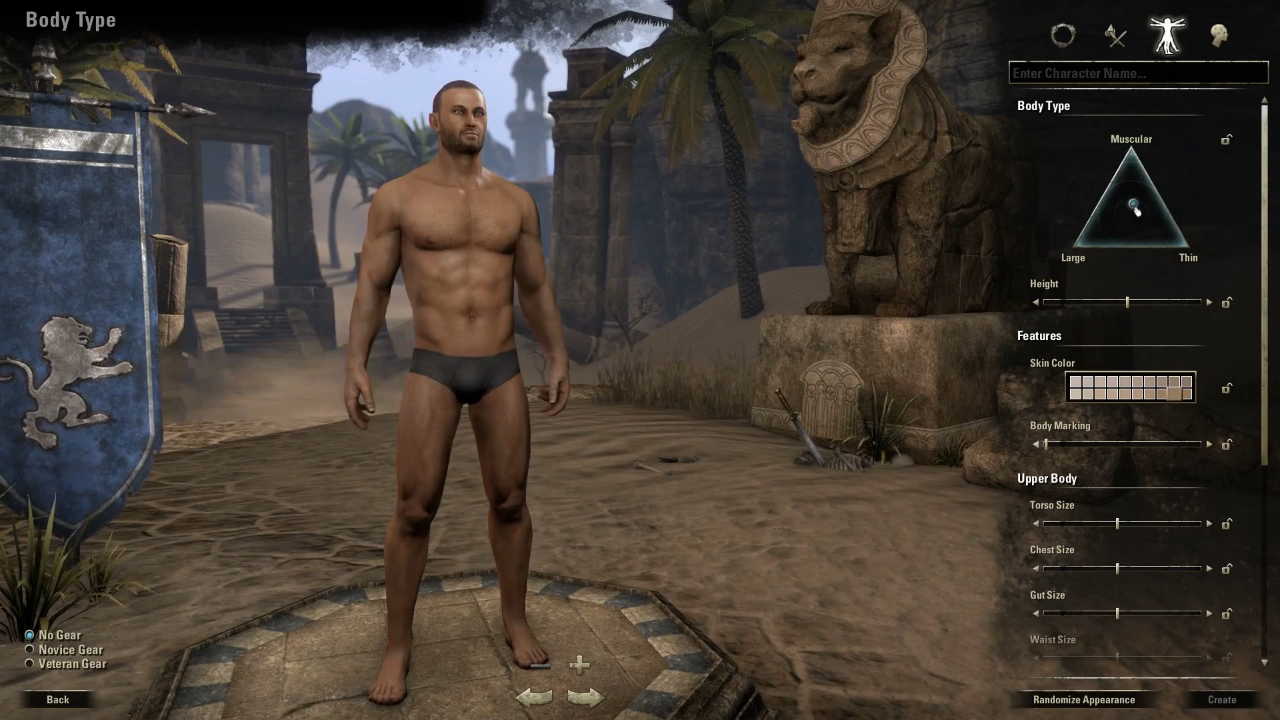 Here is customization screen. In the bottom left part of the screen you can see several display options. They allow you to switch between no-gear character, novice gear and veteran gear. This allows you to see how your character will look in different ammunition.

The center of the screen demonstrates current appearance of the character. You can zoom-in, zoom-out and rotate the model.

Right part of the screen is responsible for deep customization. If you don’t want to customize the character yourself you can use “Randomize Appearance” button in the bottom. This option will create a randomized model. You can click this button as many times as you wish until you see the result you like.

If you want to change appearance yourself you can use special sliders that allow to customize almost every part of the model. This is the most exciting part in creation process. There is a lock icon near each slider. Click it and the slider will become inactive. Thus you will “lock” your changes in order to prevent accidental clicks.

First of all you will be asked to enter a name of your future character. You will have to enter the first and the last name. Such system allows to avoid difficulties with similar nick names on Megaserver.

The customization features are split up into two general tabs – body and face.

Body tab is situated in the top of the screen. This tab allows to customize general appearance of the hero. There are two basic ways to create a new character: profile triangle and detailed sliders. If you don’t want to spend a lot of time customizing your character’s appearance you can choose the generic look using profile triangle. The "Triangle" allows to change Body Type quick. “Triangle” is an unusual slider with 3 corners and a dot between these corners. Each corner represents one of three general body options: Muscular at the top, Thin at the bottom right and Large at the bottom left. You can move this dot inside the triangle to find the best combination of these three options.

Features section is situated below the Triangle and allows to change skin color and chose body marking. Each race has its own special color options. There are also many tattoo options, for body and face separately.

If you want to do deep customization of the body you can use 11 traditional body type sliders below the triangle: Torso, Chest, Gut, Waist, Arm, Hand, Hip, Posterior, Leg, Foot, Neck. These sliders allow you to create a unique body for your character.

Elder Scrolls Online allows tweaking the size and girth of your character's body. So if you want to be tall or short you can realize it. It is a very good option. But such option is not absolute for all races. For example Bosmer are not as tall as Altmer. It is impossible to create a tall Bosmer. But anyway the height of each race can be changed.

Such body customization allows to create a lot of different models. You will not see a lot of similar NPC’s or players in the game. Each person will be different from others.

Face is also very customizable. It is possible to change different angles and other characteristics. You can change skin-color, apply one of many hair styles, beards, accents, and so on. ESO allows deep face customization.

General system of face customization is similar to body. There is also a triangle with three options: heroic, soft and angular. Face Triangle allows to do quick customization of your face. But if you want to create a really unique character you should scroll down into the slider options. There are 31 Face Type sliders for deep customization!

It is also possible to chase your character’s voice! There is special drop down menu that allows doing it. 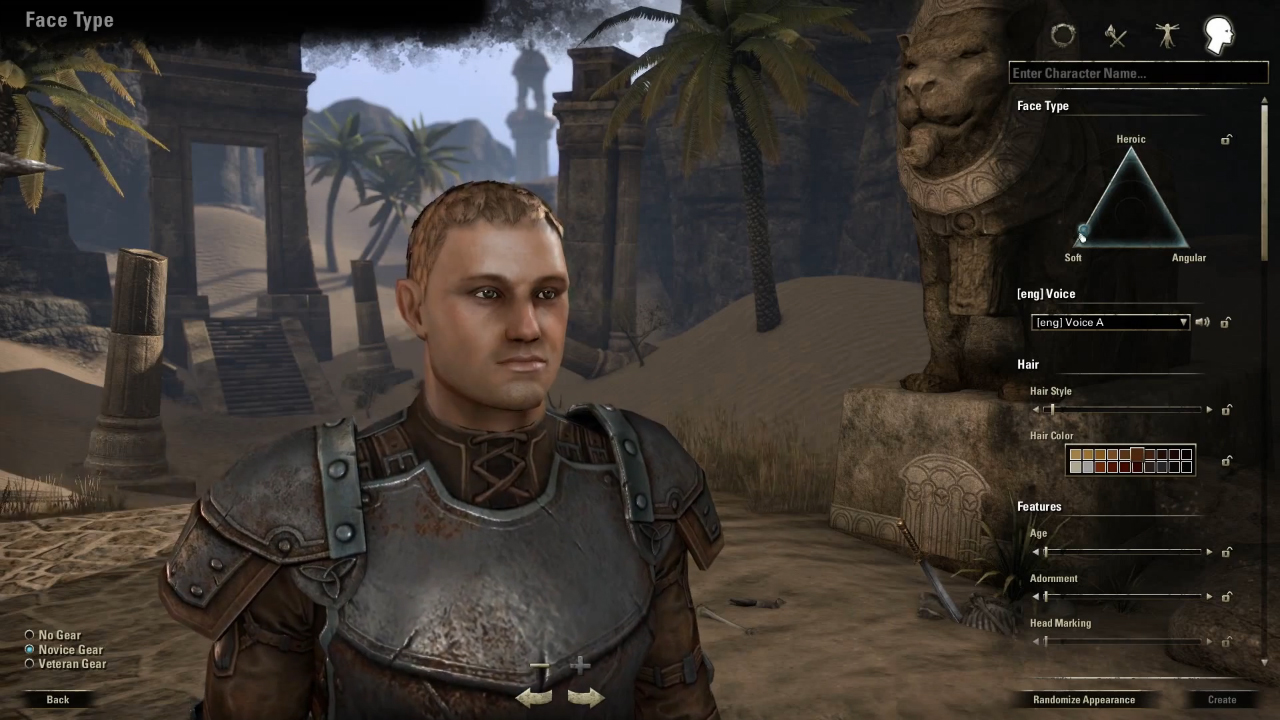 As you can see such variety of parameters allow you to create a really unique character. It will take some time but it is worth doing. Of course you can play with auto-generated appearance, but it is better to spend time and create your own appearance. The age of “clones” is over. ESO sets new MMO standards in customizing players’ appearance.

How to create a new character?