By: Ambuaz in: Tech Guides
If you are looking for THE FASTEST WAY to reach the level cap with any class within a week, this ESO Leveling Guide by ESO Mastery Guides is a definite must have. It comes with step-by-step leveling guide, proven class builds, dungeon walkthroughs, crafting and gold making strategies and more.

Elder Scrolls Online is going to use new server technology. ZeniMax call it Mega Server. What does that mean?

Every MMO player usually faces with one big problem: you want to play but your favourite servers are occupied and you have to wait. It is a traditional situation that can be seen in most online games. Such situation is sad because you have to wait until free place appears. Moreover, overloaded and overpopulated servers work very slow. It is difficult to fight against monsters and against other players. It becomes impossible to win PvP because of lags and delays. Empty servers are faster but it is boring o play there. Familiar situation, isn’t it?

Modern MMO games do all they can to merge different realms into one system to make the game better. Cross-realm raids and battlegrounds, cross-realm chats and player transfers are examples of how game developers are trying to solve the problem of separated servers. Such innovations make the gameplay more interesting. But old-school concept of building separated servers is not the best way for modern MMO games.

Zenimax-Online are going to use new server technology called MegaServer. This technology will solve all problems of old-school server concept.

Megaserver is a new scaling server technology that allows to house all players on one server but in different worlds. The main feature of the technology is flexibility. It allows to maintain the same amount of players in a particular “world”.

It is not one server. No, it is group of servers with modern hardware that work together. ZeniMax does not tell details about how Mega Server works. It is their secret and we will be able to see everything with our own eyes. Developers say that MegaServer uses all modern server technologies and innovations.

When you want to enter the game no server list appears. You just click “Play” and you are in Tamriel. All players are housed on one “mega server” but in several separated worlds. These worlds are not stable. The system can add new players to the existing worlds or can merge several worlds with few players. It is a great technology that sets new MMO standard.

Here is the example of how the system works. Imagine that an area can house 500 people before being overcrowded (it is just an example to understand mechanism, so the numbers are not real). And at the peak times there can be 10, 20, 30 or more such separated areas with 500 players in each. At quieter times, the 'mega server' can merge such areas together to maintain the world active. That means your area will never look empty. You will be able to find players any time in the morning or evening. It will be interesting to play in any time of the day.

There will be 2 separate mega servers: one in the USA and the other one in Europe. This helps to prevent lags and delays. If there is only one megaserver in the USA, European players will not be able to get the same connection speed as players from the USA. Two Megaservers are solving this problem and nobody will get technical advantages. Anyway ZeniMax allows you to choose. Players from Europe will be able to play at US megaserver.

It's possible to choose a Megaserver you wish. Any player can access any server: EU or US. All changes can be made in Launcher Settings. 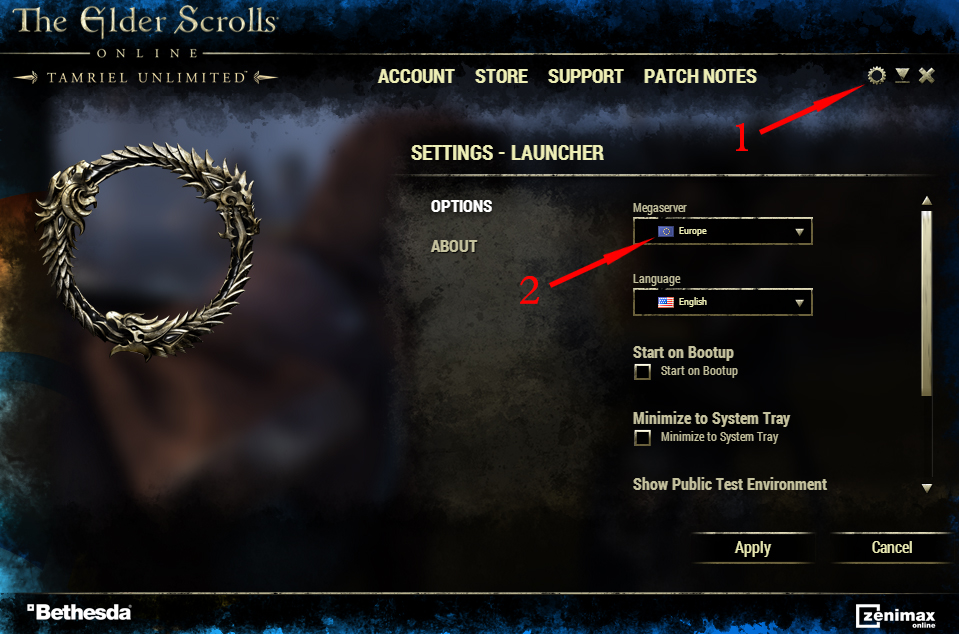 This option allows to change your current server from EU to US and vice versa. But there is one very important restriction.

Your character(s) will NOT be moved from one server to another when you switch. All characters are connected to certain servers and can't be moved.

That's why selecting a server is a very important step. How to make a right decision? There is a general rule: select a server according to the continent.

There are no differences between these 2 options in terms of players. Both have a lot of ESO players and you will not have difficulties with joining a guild or group.

Developers allow players to participate in testing upcoming patches and content updates. All you need is to connect to a special Public Test Server. We have a guide that will help you to do this.

Some players are looking for Private Servers. But there is no reason for doing this. Right now ESO is “Buy to Play” meaning you pay once and play for as long as you wish. You always have all latest updates and you can play with large number of other guys. It’s much better to use official services than private.