By: Ambuaz in: PvP Guides
If you are looking for THE FASTEST WAY to reach the level cap with any class within a week, this ESO Leveling Guide by ESO Mastery Guides is a definite must have. It comes with step-by-step leveling guide, proven class builds, dungeon walkthroughs, crafting and gold making strategies and more.

In most MMO games PvP is just a separate part that does not affect the game itself. But in Elder Scrolls Online it is implemented into general game story as Alliance War. Three alliances are fighting between each other and you are the member of one of them. Your impact into world PvP helps your faction to win Alliance War and to control Imperial City. When your faction controls the Imperial City it is possible to challenge Molag Bal and his armies.

There are no Battlegrounds in ESO and developers are not going to add them in future. All player vs. player fights take place in Cyrodiil only. On the one hand that's not good but on the other such system allows to gather all PvP fighters in one location.

Cyrodiil is a huge province where all action of Alliance War takes place. Why Cyrodiil? Because the Ruby Throne is situated here. The faction that controls the throne rules in Tamriel.

Cyrodiil is the only area where you can fight against others in the game. PvP fights are not allowed in other zones and Cyrodiil is the only dedicated territory for this. Overall size of the province is as big as it was in TES IV: Oblivion and there is enough place for fighting and having fun. There are different towns, towers and castles for sieges.

Elder Scrolls Online does not force you to fight against others and you will not have to visit Ctrodiil in your quests. PvP is not an obligation and you can enjoy PvE content in other provinces without necessity to protect yourself. Nobody can attack you outside of Cyrodiil. There are no duels in the game and if you wish to fight against other players you will have to go to the dedicated zone.

The great thing about ESO is that Alliance War does not mean only fighting against other players. There are many familiar towns where you will be able to take different quests, there are public dungeons that you can visit, dark anchors that you can destroy, Mages Guild’s books, resources for crafting, and different places for exploration. You will meet a lot of NPCs who need your help.

How to take part in battles?

All you need to take part in AvA is to enter Cyrodiil. You can do this after reaching 10th level. All players between 20th and 50th level who enter the territory of Cyrodiil receive “battle-leveling” that temporarily enhances their attributes. Players with Battle levels do not have access to full class abilities, skills and perks. Character with battle level is not as strong as a character with real level, but anyway it's a good help.

If you wish to be useful for your party and alliance join PvP after you reach 50th level. That does not mean you should not visit Cyrodiil when you are not strong enough. You can enter the province, fight there and level up but you will not be the strongest person.

If your level is lower than 50th it will be difficult to survive in battle and you will be almost useless. Other players will not have any problems killing you. Characters with Veteran Rank 1 - 10 are more useful but are still not strong enough. You can really enjoy sieges and combat if you have maximum level: Veteran Rank 14. 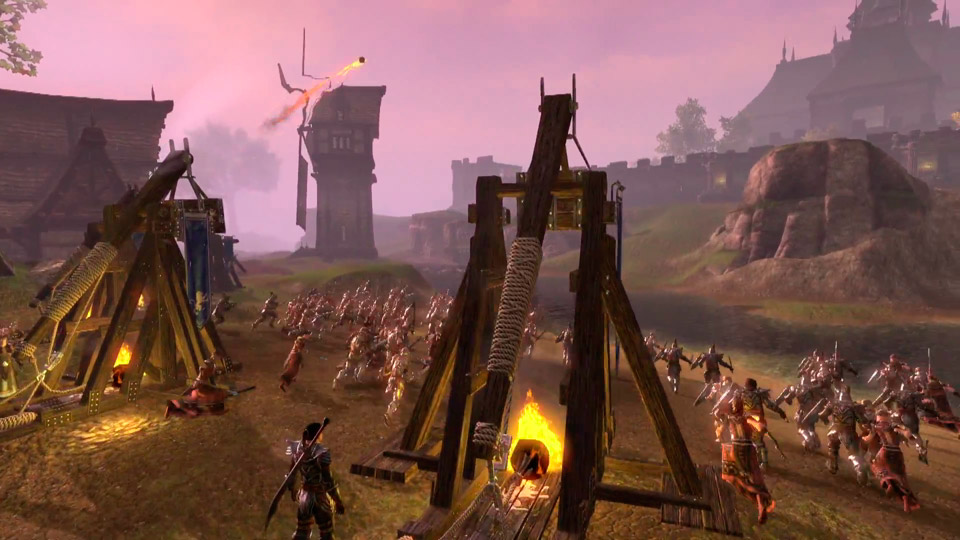 There are many different objectives in Cyrodiil: keeps, towns, villages, mines, outposts and fortresses. The general goal of the faction is to take under control and defend as many objectives as possible. Each object your faction controls boosts overall score of your faction and gives bonuses to all faction members. The score is used to determine the winner of Alliance War.

The core goal of the war is to take under control all castles around Imperial City. A faction that controls all 6 castles can crown Emperor! Emperor is the strongest warrior on the battlefield with special skill line and special powers.

There are several ways to help your faction to win. You can fight against enemies and capture objects or you can support the army by setting up siege weapons, reinforcing keeps, and upgrading guards. Supporting actions do not always require direct encounters.

How to understand where the general action is? It is not difficult. Just open your map and you will see everything there. If a keep is under attack it has a splash behind it. If there is a place where some kills takes place the place will be marked with two or three crossed swords (depending on how many alliances take part in the encounter). The size of the swords on the map depends on the size of the battle. The system will show you where the action takes place and where to.

The game has three playable factions: Aldmeri Dominion, Daggerfall Covenant and Ebonheart Pact. If one faction becomes too powerful representatives of other two can start working together against it to change the situation. The more objects your faction controls the more difficult it becomes to defend all these objects.

Combat in Elder Scrolls Online is not rotation-based. Abilities do not have cooldowns and combat mechanics is based on resource management. There are three main pools: stamina, magicka and health. Each spell, skill or ability requires one of these resources.

PvP mechanics is also based on your skill. The better you block, interrupt, react and use synergy the more experience points you receive and the quicker your ultimate bar recharges. Ultimate points allow to use Ultimate abilities. If you perform well in combat you recharge your Ultimate skills quicker and can use these skills more often. Player’s skill is a very important part of PvP mechanics in Elder Scrolls Online.

Your performance in Alliance War depends not on your class. Everything depends on your mastery in using spells and abilities. A good PvP fighter knows pluses of every ability and can choose how to act in current situation. Every class is good in ESO.

ESO is a game where you need to master your class in order to achieve good results. That means you should know when and how to act, when to use ultimate spells, how to manage your main pools (magicka and stamina) and many more. The variety of possible enemies’ builds makes each battle unique. The key to success is quick reaction and understanding of game mechanics.

Is it possible to level up through PvP?
Yes, it is possible. Each player receives experience in PvP fights for killing players from other factions, for completing PvP quests, for capturing the keeps and many more. It is possible to enter Cyrodiil and level up there, but it's not the fastest way. Moreover, if you are low level character you will be killed often and this will not allow you to receive enough experience. Leveling in Cyrodiil is difficult in general.

Is it possible to loot someone’s corps?
No, it is impossible to look the corpse of your enemy in PvP. You can not take someone’s gear and nobody can take your gear or your money. When you kill an enemy you can loot his corpse to receive alliance points.