Elder Scrolls Online takes place during the Second Era (1000 years before Skyrim). This time is not covered by TES games and is considered as a period of great conflict in Tamriel. Three factions are fighting between each other for the Ruby Throne in Cyrodiil. At the same time ancient evil is rising. Molag Bal, Daedric prince of domination and enslavement of mortals, is going to merge Nirn and his plane of oblivion, Cold Harbour, into one. So there are two general conflicts in the game: Alliance war and war against Molag Bal forces. The player starts his way as a member of one of three powerful factions: the Aldmeri Dominion, the Daggerfall Covenant or the Ebonheart Pact.

The famous Akaviri Invasion occurred just before the time frame of this MMO. This invasion was a stimulus for Dunmer, Nord and Argonian races to form a union called The Ebonheart Pact. Invasion of Akaviri forces was a heavy strike and aftermath of the invasion can be seen during the ESO time. Other factions were formed to give a response to Empire and protect lands from enemies. 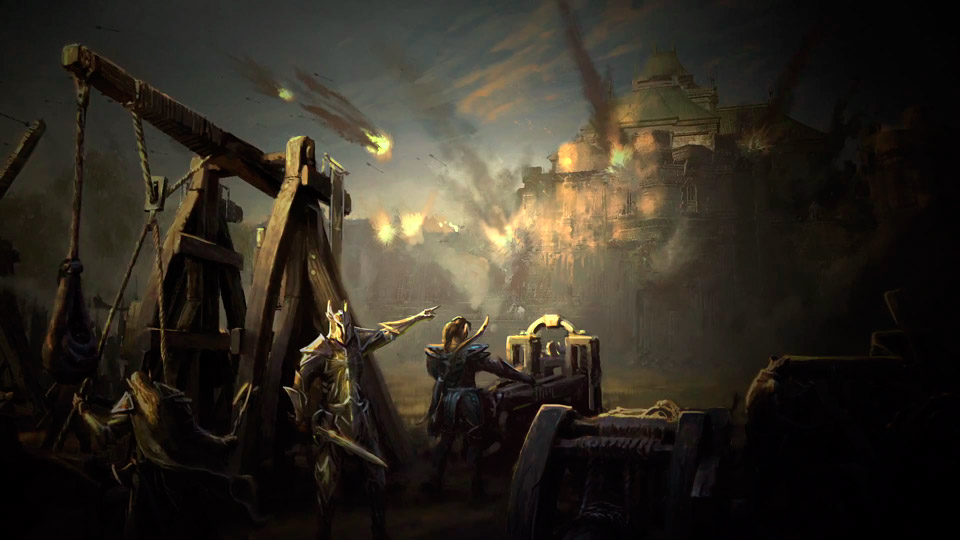 The center of the Alliance war is Cyrodiil. Ruby Throne is controlled by the Empire and three factions are fighting on the territory of Cyrodiil for taking the throne under control. All three factions think that only a strong ruler can change the situation and return peace in Tamriel.

Molag Bal is the main antagonist. He is a Daedric prince who has a terrible plan to merge two worlds: Oblivion and Nirn. More and more creatures from Oblivion are entering Tamriel. Dark Anchors appear everywhere to draw Nirn into Oblivion. Molag Bal has a secret assistant in Tamriel whose name is Mannimarco, King of Worms. He is a powerful necromancer and is working closely with Tharn family and its leader Abnur Tharn to provide the Empire with an army of undead. The Tharn family are secret Daedra worshipers. Mannimarco is a pivotal figure throughout Elder Scrolls lore. You have a chance to confront him at the height of his power.

Territory of the whole continent is involved into the game. Not all provinces will be available after the release. Some provinces will be added later in future expansions. All provinces have unique landscapes and nature. All textures were created according to the characteristics of each province. Developers are trying to keep the atmosphere from single player TES games. You will recognize Skyrim with many snowy mountains and Morrowind with its vast desserts as you explore Tamriel.