By: Apple.Snowsong in: Game Guides
If you are looking for THE FASTEST WAY to reach the level cap with any class within a week, this ESO Leveling Guide by ESO Mastery Guides is a definite must have. It comes with step-by-step leveling guide, proven class builds, dungeon walkthroughs, crafting and gold making strategies and more.

Are you ever intrigued about what Daedric Dolmens and their Dark Anchors are really all about, and about the Elder Scrolls Lore for why they appear throughout your travels? The Daedric Dolmens are dark portals which Molag Bal’s dark minions (such as Worm Cult Battlemages), summon to use dark anchors to latch his Coldharbour of Oblivion to Tamriel of Nirn. So the Daedric Dolmens of ESO are also referred to as Dark Anchors. The Daedric Prince Molag Bal attempts to use these as part of his evil scheme called ‘Planemeld’, to hook his Coldharbour realm below to Tamriel above, and pull Tamriel right into his realm of Coldharbour in Oblivion! Coldharbour is a darkly mirrored mocking reflection of Nirn, so with dark slimey grounds, dark jagged rocks, lava pools and fiery skies.

Coldharbour consists of destruction and death, for Molag Bal is not only the creator of Vampires, but also the Daedric Prince of domination, corruption, and a soul-thief and enslaver of mortals. So that Molag Bal cannot completely take advantage during the wars of Tamriel -- Heroes from all alliances can fight against these Daedric Dolmens -- to thwart Molag Bal's attempts to merge Nirn and his Coldharbour of Oblivion into one ghoulish hellscape. You can gain experience points, loot rewards and achievements whilst having fun helping to battle these dark Daedric forces, by shutting down Daedric Dolmens when they become active.

Molag Bal sadistically enjoys instilling fear dramatically, so you will easily hear and see when Dark Anchors are cast and become a Daedric Dolmen site becomes active in your area.

["Let Coldharbour remake Nirn in its own image! God of Schemes, we offer this victim to you! Through the power of innocent blood, bring forth your anchor and let two worlds become one! Bind this world with your chains! Draw it ever closer to your realm! ]

You will then hear the booming sounds of the Dark Anchor dropping down at the Daedric Dolmen site, as Molag Bal himself them replies in booming voice:

["I will dominate this world and all others in time. The strong should always command the weak."]

You can now look at your map for a dolmen symbol (that looks like a spinning throwing star) and see exactly where it is and what it has been named; and invite other players to meet you there to battle the Daedric forces to take it down!

Remember, except for the Starter Islands, there are generally three Dolmens per zone, for a total of fifteen per faction, and ten in Cyrodiil and Coldharbour. All alliances have it in common, that they wherever they are they can fight against the Daedric Dolmen’s of Molag Bal and battle against his waves of Daedric enemies and cultist foes.

When a Daedric Dolmen becomes activated, many Daedric guardians spawn continuously whilst the Anchor is being destroyed by your activity of killing them, and as their souls enter each pinion pressing use (when the option appears) for deactivating each of four Anchor Pinions as you go.

Fortunately, destroying anchor pinions also restores your own resources. Then ultimately you will be battling the powerful Daedra after the fourth pinion is deactivated, until all five dark anchor pinions have been deactivated and with the Daedric Dolmens Dark Anchor destroyed you have closed that portal from Coldharbour of Oblivion. 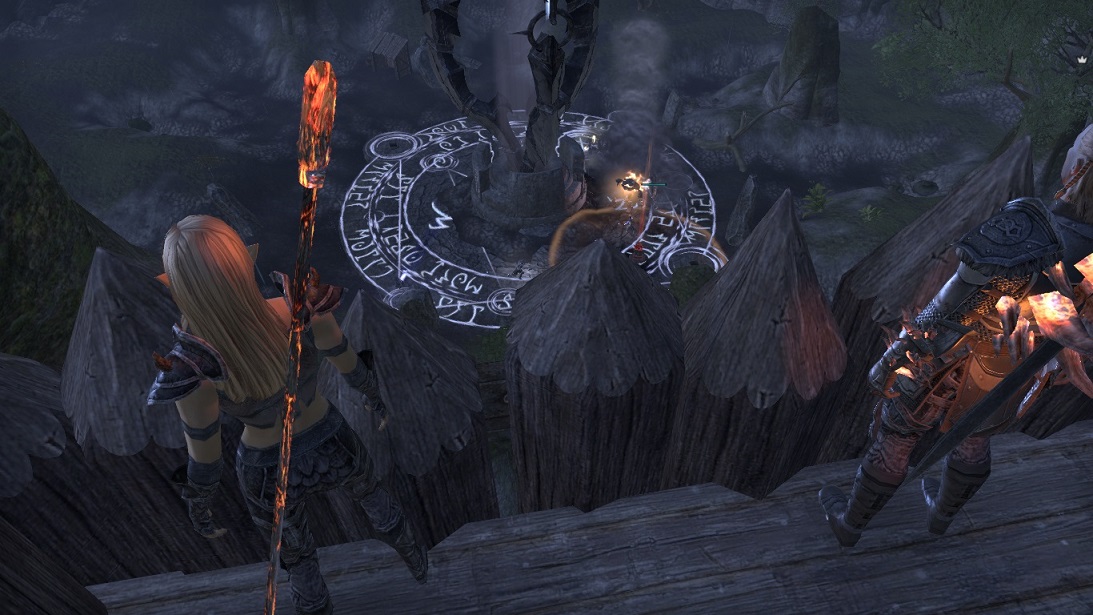 When a Daedric Dolmen is becoming active, enemies start falling from out of the portal that opens up above it in the sky, and you will see with the growing bluish circle glow on the ground where the enemy monsters will land and come to fuller form. You do not have to wait for them to land to attack them with your summoned familiars or AOE abilities/spells. You can try to start damaging them as they are coming out of the sky portal to possibly get a jump on them.

Various kinds of Worm Cult humanoids with special abilities, (such as Battlemage, Pyromancer, Necromancer, Ravager, Nightblade, and Dreadmage), will have to be defeated in the first wave to cause the next wave of enemies to spawn; when a Dolmen first becomes active. Next you may encounter various Daedric and Undead monsters that are affected by your Fighters Guild abilities.

Once you have destroyed the four pinions surrounding a Dark Anchor you may spawn more powerful versions of some these common enemies, the latter of which may have Dread or Dreaded in front of their name; along with stronger enemies such as ‘Bone Colossus’ or ‘Draugr Deathlord’.

Nearly all Dark Anchors share the similar mechanics, however there are special Generals of Molag Bal, which you can get extra achievements for and when these are present at a Dolmen, and they take the place of Dread Enemies. Generals of Molag Bal appearing at unique Daedric Dolmen invasions are rare special events and are announced by Molag Bal; and whether one General appears or a Dremora Group of a particular General, they are still named after one of the only sixteen Generals that so far exist in the game.

Each Daedric Anchor that a character destroys is rewarded with an XP bonus to the Fighters Guild skill line. This in turn, opens up valuable new Fighters Guild abilities for you to invest skill points in to be able to better fight Daedra and the undead. You will also get exploration XP for the first time you do a Dolmen and it gets filled in on your map as you begin. You will also get XP for killing the spawning mobs. Besides, enemy loot drops from the first wave of cultists and from more power foes after the fourth pinion is defeated -- participating players can also win achievements and random cosmetic armor and weapons.

Rewards for destroying Dark Anchors are to be distributed evenly amongst active participants. However, it is possible that players still might not receive loot or experience if the anchor and enemies are more than five levels below their own. Evenso, chest drops are to the right of the middle stairs upon defeating the fifth anchor pinion (and final boss to destroy the Daedric Dolmen), and each player actively participating in the battle to destroy the Daedric Dolmen are each supposed to be able to get something from the chest now.

Each time you battle and defeat a Daedric Dolmen, it will check that one off in your journal, to add towards achievements too. You can look in your ingame Journal, and then go to the Achievements tab, then to the Dark Anchors tab to see all the many possible achievement awards and your own progress towards them. There are also special Daedric Dolmen achievements for fighting some of the unique Daedra that may appear, and the Daedric Lord Slayer Achievement for defeating all sixteen of the Generals of Molag Bal; including the Son of Molag Bal. Have fun and please feel free to leave any comments or suggestions for other players. Happiness on you All!

← Armor Dyes - Customize Your Gear! How to Level Enchanting in ESO Fast? →